Get FREE information, advice and more from Oliver Whitham

Home/Blog, Marketing/A Year After Starting a Community Online
Previous Next

Just over a year ago I created a community on MeetUp.com called Austin Virtual Workers. Since then it has accrued over 500 members (*edit* now over 700 members!), three awesome community manager volunteers, and has regular meetups several times a week.

Austin Virtual Workers came from a small gap in the Austin market place, a hub of freelancers with little way to connect. Sure there were co-working spaces, but many freelancers and remote workers don’t want to pay for a co-working space, and end up sat alone at coffee shops. I decided to try and form a community from these telecommuters, a co-working group that switches up locations and people at every event.

The closest existing competition (Jelly) had a couple of sign-ups (usually organizers) on irregular meetups, and was receiving little in the way of promotion. Whilst it might do well in other cities, it’s Austin community was lacking what I was looking for. There were a couple of other groups targeting the same market as me, however they mostly focused on the social/party aspect, I was looking for people who wanted to be able to work around others every so often, a surprisingly rare luxury for many freelancers.

The best part of this was that it would help me find others to work with too, but at the same time, I decided to launch this with more of a business mindset, even if it wasn’t financially focused.

Even though I decided to run this with a business mindset, AVW has always been a passion project. it’s bringing hundreds of like-minded people together and introduced me to some great people in Austin. Seeing the group mature is like watching a child grow older, and though the last year has been great, I’m looking forward to even more in the coming years!

From the very start I knew I would have to focus on several key areas to ensure this groups success. Too many meetup groups turn in to ghost towns. This became a much more pressing issue two months in, when I could no longer work remotely.

Locking down a target audience was more difficult than I initially expected. A lot of people who I first reached out to immediately asked when the parties were going to be.  This worried me.  My aim was to create a co-working group, any socials would be for the co-workers.  If people just wanted to party, there were already plenty of other groups out there, not the competition I wanted.

The first selection is pretty self explanatory, the second looks at finding people who are working. Age range was pretty immaterial at this point, people from all ages work remotely.  Finally, a lot of people who work remotely have some kind of interest in tech and entrepreneur scene of Austin.

Over the months I did refine this a little through ad testing, but my initial audience selection remained solid.

Reaching an Audience from Nothing

I had to find people who would potentially be interested in joining and becoming active members in the group.

This was fairly easy to get rolling, even with a low budget.

I decided to host the group on Meetup.com since it offered an easy way to get in touch with a large market of potential telecommuters.  I didn’t do much ‘outbound’ marketing on the meetup.com channel, I let Meetup.com do it’s work.

I started a parallel group and page on Facebook.  In terms of reaching out to new people, Facebook offered a few small opportunities, that for the time investment, had limited success. Facebook involved more outbound promotion.

One technique I did use initially was to send a personalized message to new members.  I abandoned this early on. Mostly because it took a lot of time to research and write the hello, but I didn’t see much of a difference when I stopped.  At some point I intend to test this again, but more as a time filler than a core part of my strategy.

Facebook did prove useful for reaching out to potential members through my own network. This was an easy move to gain early members to  my group since I had existing trust and I knew who would be interested. Posting messages on my Facebook wall, sharing the group and inviting friends to group events all helped initial growth.

Reaching out to non-friends on Facebook organically was a little more difficult. Creating events was one of the more effective methods, but it was still fairly limited.  Instead of leading Facebook members to Facebook groups, instead I shared Meetup events on Facebook, and then promoted the Facebook group on Meetup emails. This was a round about way of doing things, but had a much higher effectiveness than sending people to the Facebook groups/page directly.

I had some success with Facebook ads. It was a fairly effective way to reach new members who I had no existing connection with.  My goal was not to buy my way in to success though, so I only invested a limited spend in these before returning to more organic member generation techniques.

Meetup and Facebook both proved to be fairly good tools at helping retain an active membership, and re-engaging some lost members.

Meetup runs pretty much by itself. It announces meetups to members of your group, but for larger events a few additional mailings through the Meetup tool can help. Running a regular meetup on the same day, time and general location definitely helped for a core group of regular attendees.

Unfortunately you can’t export emails from Meetup.com so you can’t create a custom audience on Facebook for your existing Meetup members.

Where Facebook excels over Meetup for retention is through it’s inbuilt platform retention. People may stop regularly logging in to Meetup, and send their emails to a junk folder. However over 50% of Facebook users log in to the platform every single day, with many of those users signing in a minimum of three times. Considering mobile users etc, I’d bet the numbers in the US are much higher too.

Because people are constantly logging in to Facebook you can piggy-back on their platform retention to remind people about your events.  There’s a few ways this worked on Austin Virtual Workers.

To ensure optimal retention of members it’s best to get multiple touch points.  To reach this goal I have focused on placing members on both Facebook, Meetup and I have also started moving towards collecting emails.

Facebook also allows me to build relationships with top members who contribute to the group. Whether they are arranging meetups, bringing in new members or just regularly attend events. Through Facebook I got to know some of the people who were helping me make my group successful.

Where AVW is Now!

Over a single year the Austin Virtual Worker’s meetup group has grown dramatically, now numbering well over 500 unique members across all platforms, and growing by at least two new members daily. Our active member count is staying relatively high and it shoots up whenever we have a social to help all our members get to know one another! 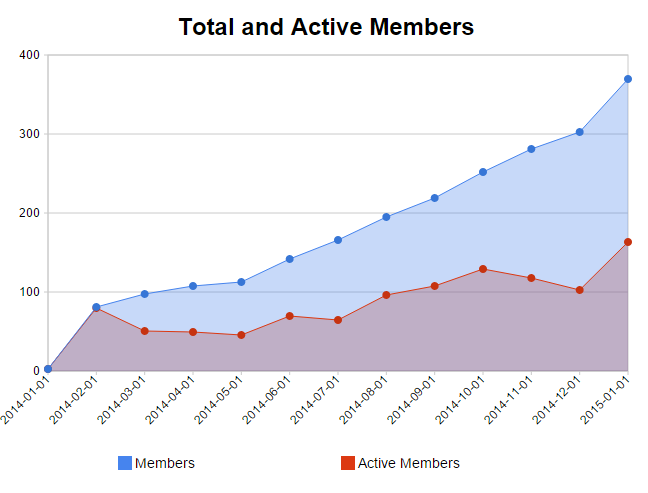 I made the mistake of not getting Google Analytics installed until a little later, but since I installed Google Analytics We can see a steady flow of around 200 visitors a week to the Meetup group. With just a little promotion work I saw this grow quickly to over 400 weekly visitors, although weirdly enough that spike didn’t correlate with an increase in activity or new members (It was also the Christmas period which may have ‘dampened’ the effect).

The community itself  really has become a community, and though I am now working in an office the majority of the time, we have some amazing volunteers running meetups for the group and keeping it active!

The biggest thank you’s going to Tara, Darren and Rob who have been critical for keeping the Group alive whilst I work remotely. I cannot stress how having a strong community or organizers as well as members helps keep a group active.

On my end I’m continuing to promote the group, pushing for more members and keeping them engaged.

But of course we always have to look at…

As Austin Virtual Worker’s grows there is a  lot I want to do to expand and improve it.

Firstly I’m looking for more people to run events around Austin, right now most of the meetups are in South locations, my goal is to get meetups in north central and central locations as well.

Secondly I want to keep on growing that member base.  More members means better meetups, and better connections.

Thirdly I’m going to be looking for sponsors that not only provide us with a budget for events (free coffee, free drinks at socials maybe?) but also are useful for our members.

Fourth I need to give people more reasons to stay.  We have a good activity rate at the moment, but I want to make it better!

And finally, I’m looking to find ways to make the group better for every single one of our members!

About the Author: Oliver Whitham

Oliver Whitham is a marketing growth leader based out of Austin Texas, originally from York, England. He currently spends his time as the Senior Online Marketing Manager at WP Engine, focusing his talents on demand generation and traffic optimization.